"Think 100% - The Coolest Show on Climate Change" is Hip Hop Caucus’ award-winning multimedia platform that highlights solutions to climate change and environmental injustices, including a just-transition to 100% clean energy for all. 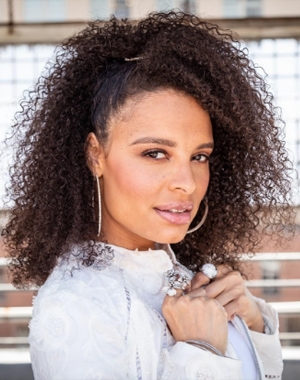 Antonique Smith is an acclaimed actor and a 2015 Grammy nominated singer and writer. She is most famous for her starring role of Faith Evans in "Notorious" where she received rave reviews and was praised by critics, including Jeffrey Lyons who called her "one to watch". Antonique first garnered attention in her buzz-worthy leading role in "RENT" on Broadway as Mimi Marquez. She became the international poster girl for the show. Antonique played CIA agent Sandra Burns in "Abduction" opposite Taylor Lautner and Alfred Molina, and in "Yelling To The Sky", playing the starring role of Ola O'Hara, opposite Zoe Kravitz, Gabourey Sidibe and Jason Clarke. In 2018, Antonique will be starring in the second season of the NETFLIX series, Luke Cage. Legendary director Sidney Lumet heralded Antonique as "an amazing actress with a great career ahead of her". Antonique shocked the world in 2015 with the release of her EP "Love Is Everything", stemming from her successful Kickstarter campaign in 2012 where Smith raised over $50,000 in 30 days from her fans. 'Hold Up Wait A Minute (Woo Woo)' is the Grammy nominated, edgy, uptempo, future meets retro, soul pleaser. Antonique is also an accomplished songwriter. Having co-written her Grammy nominated single, she has also written songs for several television shows including Shots Fired, where she co-wrote the show's theme song along with several other original songs featured in the show and composed a piece of the score with great Terrance Blanchard. Having completed a 20-city "Act On Climate" tour with the Hip Hop Caucus and also singing for the Pope's climate rally for over 100,000 people on the National Mall in D.C., Antonique is a serious advocate for climate justice and human rights. In 2014, Antonique’s cover of Marvin Gaye’s “Mercy Mercy Me” was selected as the anthem of the People’s Climate March. As a People’s Climate Music Ambassador, Antonique traveled to Paris in 2015 for the United Nations Climate Change Conference, COP21. In 2017, she released her version of “Here Comes the Sun,” featuring Jeremih during New York Climate Week and was recently honored by Grist as one of the 50 fixers in the climate space. A New Jersey native and a Superstorm Sandy Survivor, Antonique has dedicated her time to working to bring attention and support to vulnerable communities. From working in Flint, MI to helping the communities affected by Hurricanes Irma, Harvey, and Maria to drawing attention to the oil drilling taking place in Los Angeles and being and advocate for solar energy, Antonique is a leading “Artivist” and her efforts are a real-world example of how culture can affect change. Following the likes of Barbra Streisand and Diana Ross, Smith is pursuing excellence in acting as well as a successful recording career. Antonique’s activism simply adds another layer to her versatility.